Here at ART OF WAR, we have been developing original Japanese characters for many years based on the theme of “Conflict” .
We introduce unparalleled characters to the world that are a realistic portrayal of authenticity and convey a deep spiritual nature.
We reflect on the meaning of “Justice” through a “Battle for Justice”.

We Will Exhibit at TIFFCO...

Avatars To Be Launched at... 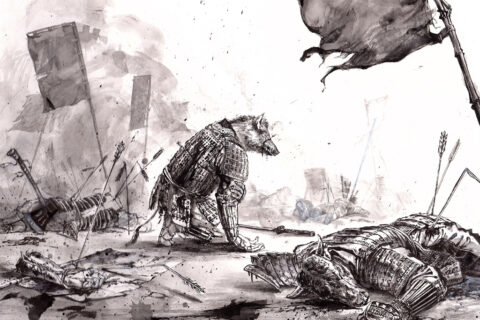 Created by ART OF WAR

SAMURAI ANIMALS™ is an original character brand which was launched by KENSIN CO., LTD(ART OF WAR) in July 2011.
The twelve Samurai Animals of the Zodiac are divided into two warring armies, with each side fighting for their own version of justice. People can identify themselves with a particular animal character depending on their year of birth.

SAMURAI ANIMALS™ is a fantasy story which centers on the Twelve Animals of the Zodiac who fight to establish a kingdom.

Based on the message of “Justice”, SAMURAI ANIMALS™ presents authentic characters and an intricate and engaging story never seen before.

SAMURAI ANIMALS™ is a combination of two important elements -“ Samurai” and “animal characters”- into a single concept.
The possibilities for SAMURAI ANIMALS™ are countless and the potential is infinite.

SAMURAI ANIMALS™ was nominated as one of five finalists in the 2015 Best Character or Toy Brand Program of the Year category, alongside other nominated world-famous properties from licensors such as Marvel Entertainment/Walt Disney Company, Hasbro and Sanrio.

We are looking for licensees.

Please feel free to contact us for consultation and questions.